< Back to All Articles

Close-Knit Community: How a California Craft Brewer Weaves It All Together 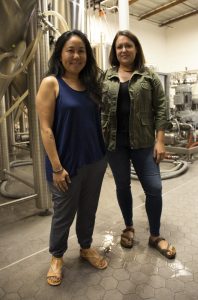 The youngest of three daughters with three daughters of her own, Lynne Weaver left a lucrative career as a tax accountant to be a full-time mom. However, the driven mother of three knew she wanted to do more. So, in 2013, she combined her background in

finance with her passion for home brewing to start Three Weavers Brewing Company, named for her three girls.

“I wanted to be a role model for my daughters, like my mother was for me and my sisters,” says Weaver, who is doing just that by running the successful microbrewery with the help of a female brewmaster and a woman-majority management team. “I really wanted my kids to know that their mom is doing something in a male-dominated field and doing it well, and that they can do whatever they want in any field they choose.”

Although being led by women makes her company somewhat unique in the craft brewing world, Weaver says she did not set out to create that demographic. “It’s cool, but it happened organically,” says Weaver. “I have a feeling it’s because women within the industry end up gravitating toward us.”

They’re not the only ones. Weaver and brewmaster Alex Nowell are well-respected and sought-after within the craft brewing industry for their expertise, which they gladly share with others. And although they are happy to discuss the fact that Three Weavers is run by women, at the end of the day, they are proud of the ability of their team as a whole and the quality of the beer they produce.

One way Three Weavers maintains that quality and keeps up with growing production demands is by using a FILTEC 3G inspection system to check the fill levels in their 12- and 16-ounce cans. Considering Three Weavers is running 250 cans per minute, it’s a critical piece of equipment on their canning line, and Weaver says they never considered anyone other than FILTEC to provide the inspections.

FILTEC started in the late 1950s and, in partnership with some of the largest beverage companies in the world, created the first-ever empty bottle inspection system in the U.S. The system inspected the bottles to make sure they were clean and undamaged before being filled.

“At its core, FILTEC was at the start of the inspection testing movement utilized in the beverage industry today,” says Scott McGinnis, Global VP of Sales and Marketing for FILTEC. According to McGinnis, the company has ebbed,  flowed, and grown considerably over the last 60 years to a full line of inspection-based equipment.

Three Weavers uses FILTEC’s gamma radiation-based system, where a beam of gamma particles flows across each can. If the liquid in the can is not at the right height, the beam is interrupted, and the sensors detect that the can is not filled to the appropriate level. 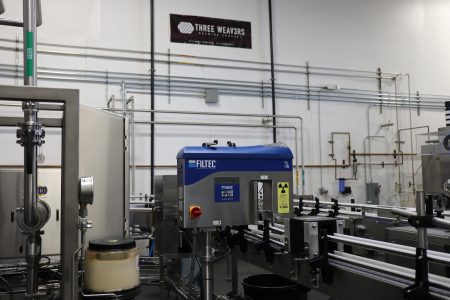 The FILTEC 3G inspection system can detect over- and under-filled containers and capping defects.

The level of accuracy is usually within 1 or 2 milliliters.

“The Three Weavers Group is an exciting partner for us,” says McGinnis. “Craft brewing, especially in the U.S., has grown exponentially over the last five to ten years.” He says the 3G system Three Weavers uses has an incredibly long lifespan, can run for extended periods of production, and can adjust to inspect either cans or bottles. FILTEC systems can inspect almost anything, including products such as salsa or deodorant, by measuring whether it is the right height inside the packaging.

For Three Weavers, FILTEC’s goal is to reduce the risk of customer liability by making sure the cans are filled appropriately. Also, from a productivity point of view, being able to seal the can and test it, without a break in the action, keeps production from slowing. With the FILTEC 3G, a canning line can have a completely automated system and check the fill level in one motion at the end.

FILTEC and its innovations and experience are available to customers of every size, from the largest beer and beverage manufacturers to every craft brewer putting beer in a can. “Craft brewing has turned into a very big business, but it’s a very small industry,” says McGinnis. “There are a small number of craft brewing alliances and craft brewing organizations, and they all talk to each other. As competitive as it is, it’s pretty collaborative for these smaller craft brewers.”

Collaboration and helping others are what Three Weavers Brewing Company is all about. “It’s better to extend a hand than to turn your back,” says Weaver, recalling a time she gladly lent some malt to a local competitor to calibrate their scales. “Our ethos in the sense of family and friends ultimately creates the community. A community in which we’re very welcome and inviting—inclusive not exclusive.” And everyone is welcome in the brewery, including kids and pets. 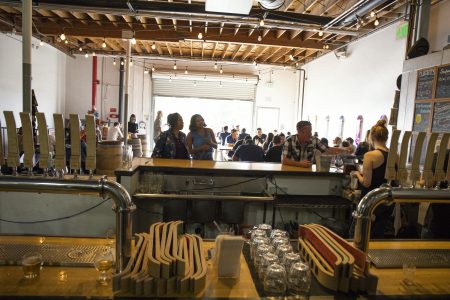 Three Weavers Brewing Company is heavily involved in all its different communities—the craft brewing community, the family and extended family of its employees, and the Los Angeles-area community of Inglewood. Weaver is proud to support the community of Inglewood, whose reputation has struggled in the past. She chose to locate her brewery there to help boost the local economy and bring people in. “People who have never stepped foot into Inglewood have a preconceived notion of a dangerous place, and that is not the case,” says Weaver. “It’s evolving and changing. They’re picking themselves up by their bootstraps. And we are changing people’s opinion of Inglewood, one beer at a time.”

On the state level, Weaver sits on the board of the California Craft Brewers Association, and her company donates time and energy giving talks for the Brewer’s Association and the Craft Brewer Summit. They have even been on the international stage, with Nowell doing panel discussions and judging various beer-making competitions. 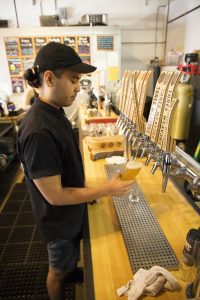 Their latest venture, of which Weaver is especially proud, is a collective of craft breweries called CANarchy. According to the Three Weavers Brewing Company website, “CANarchy is a collective of leading regional breweries across the U.S. that have banded together to maintain their brands, brewing philosophy, and independence while supporting each other in their respective growth initiatives.” Weaver says the collective, which includes seven breweries so far, comes together on a weekly basis to share information and best practices. Its motto is “Independent together.”

Weaver says such an alliance can strengthen the craft brewing industry as a whole, and it fits her and Nowell’s vision for Three Weaver Brewing Company. “Giving our time and energy to the community is something we love to do,” says Weaver. “We live and breathe commitment to the community; it’s all the way through our DNA, and it is shown through what we contribute, be it at the non-profit level or within our own industry, city, or state. That defines us pretty clearly.”